It has been a while since I last talked about Ezbl, my Emacs interface for the excellent Uzbl browser.

I have moved far beyond simply being able to embed the browser in Emacs, and have added resizable windows, custom mode-line text, and most importantly, a cookie handler. The only major piece which still needs work is the keyboard input, since the only way to get text into Uzbl at this point is to paste it in with the mouse. I have some ideas on how to move forward; most involve wacky hacks with the DOM, so we'll see what turns up.

The next big push will be taking advantage of the new-ish Uzbl events system, so I don't have to do as much polling. Profiling Ezbl (with the built-in "elp" package) when loading Yahoo.com and a few Twitter pages gives the following, rather uninspiring result: 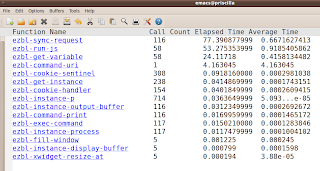 Yes, it really is spending 77 seconds of CPU time on ezbl-sync-request, and yes, that is TERRIBLE. Luckily, I know how to move forward. I had been using a reasonably clever (but apparently horribly inefficient) system for making synchronous requests to Uzbl (for getting the value of a variable, for example). Emacs has a number of built-in ways of doing this, but I am thinking that with Uzbl's event system, I can just store the value of all the Uzbl variables within Emacs (there aren't that many) and update them on the Emacs side whenever they change. This way, I'm not having to do an expensive query to Uzbl each time I want to update the mode-line, for example.

In other news, I worked (if you can call it that, it was about 4 lines of braindead-simple code) on a patch to Emacs to add support for the SOCK_SEQPACKET socket type. Since Uzbl uses SOCK_SEQPACKET for its cookie sockets, having this work was essential for being able to communicate with Uzbl (without having to patch Uzbl, which I wasn't keen on doing). There are plenty of problems with the SOCK_SEQPACKET patch to Emacs, not the least of which is that it only works for Unix domain sockets, and not actual network sockets. Bummer.

If anyone is comfortable (or at least competent, which excludes me) with SCTP, Emacs could use some expertise in adding SOCK_SEQPACKET over AF_INET sockets. It's a rarely-used but useful protocol, and it's a shame that there is something which exists that Emacs doesn't yet support :).

Stay tuned for more!
Posted by haxney at 6:10 AM