As a followup to my first Un-Terrible-ize
Ubuntu 11.10 post, I thought I'd show everyone what my computer looks like
after reverting the desktop to a working state. 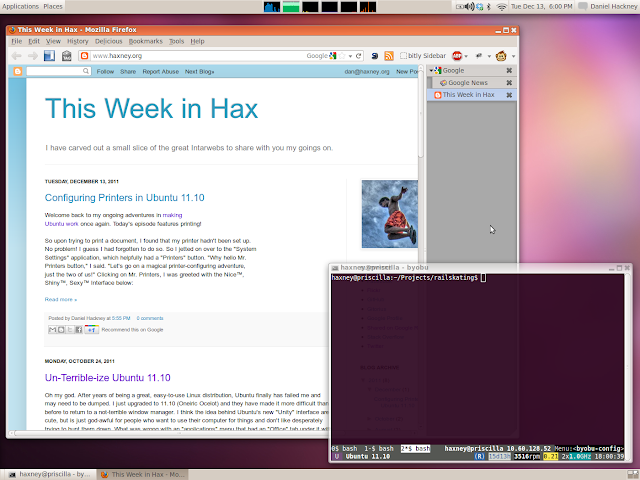 Nice, neat, with all of the things I want and none of the things I don't want. I
have a couple of customizations for Firefox (like the tabs on the side), and
along the top is the "System Monitor" applet, which displays (from left to
right) the current CPU usage, memory usage, network activity, swap space, load
average, and disk usage. That's undoubtedly overly geeky for many people, but I
find it quite useful.

Now, for comparison, here is what the default Ubuntu 11.10 interface looks like:


Later on, I may post a step-by-step description or even a script for getting
from the bottom image to the top.

Posted by Dan Hackney at 9:00 PM No comments:

Welcome back to my ongoing adventures in making
Ubuntu work once again. Today's episode features printing!

So upon trying to print a document, I found that my printer hadn't been set up.
No problem! I guess I had forgotten to do so. So I jetted on over to the "System
Settings" application, which helpfully had a "Printers" button. "Why hello Mr.
Printers button," I said. "Let's go on a magical printer-configuring adventure,
just the two of us!" Clicking on Mr. Printers, I was greeted with the Nice™,
Shiny™, Sexy™ Interface below:

Read more »
Posted by Dan Hackney at 5:55 PM No comments: