I recently started replaying the Mass Effect trilogy, having not much else to do while under quarantine. It's been about 7 or 8 years since I'd played through any of the games, since the ending of ME3 really made the rest of the series feel pointless. Now, with some emotional distance and a fresh perspective, I'm going through again and noticing some things that I didn't appreciate before. This post is about viewing angles and why you miss out on some of the pretty skies that exist in the game (and still look pretty great even today).

First things first, let's get our bearings straight. I'll take a random screenshot from a combat portion of the game (click on the images for a larger size):
Breaking out the measuring tape, we see that the aiming reticle is indeed in the middle of the screen: 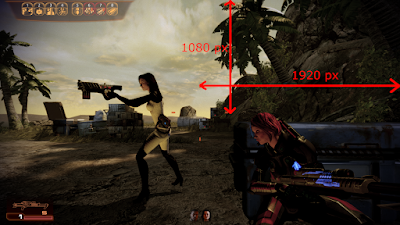 And there are some pretty things to see in the sky:
So why don't we look at that more? It's due to the gameplay. Let's take a look.

For the rest of the post, I'm going to use a different level, since I took more and better screenshots while playing through this one. Here's what it looks like when looking straight ahead, with the reticle at the horizon: 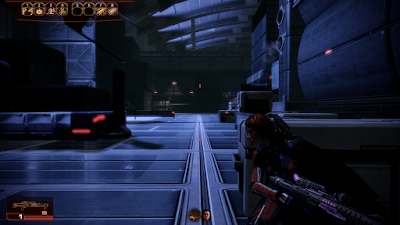 Notice that we can see some of the skylights on the ceiling. Not the prettiest sky in the game, but sufficient to demonstrate the point. As expected, half of the screen is ground and half is "sky" (ceiling). 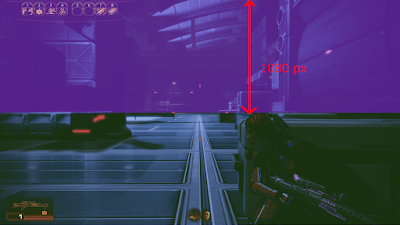 As an aside for those who haven't played the Mass Effect series, it is a cover-based shooter, especially in 2 and 3. You are (mostly) safe when in cover, as long as enemies don't flank you and get cut to shreds pretty quickly when standing out in the open (especially on "insanity" difficulty). This means finding cover and moving between cover locations while having a good line of sight on the enemies is the core of the gameplay. Also: play Mass Effect. It's great.

How does this flat angle work when we're looking for cover? 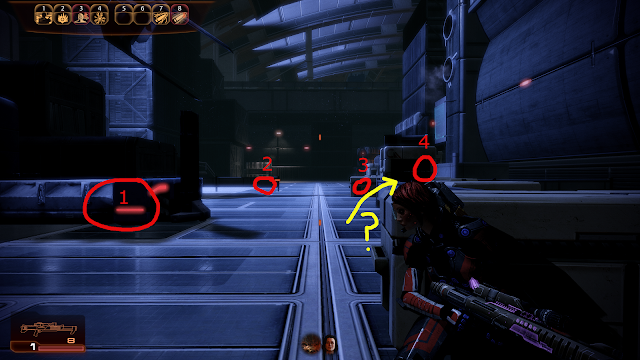 We can see a four possible cover locations, and from this angle, it isn't clear whether we could jump over the railing to get to location 4.

What if we look slightly downwards? 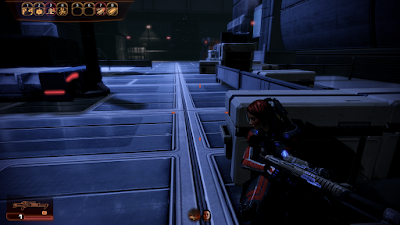 Woah! Huge difference! Now we can see many more cover locations, and it is clear that the railing to location 4 is thin enough to jump over. 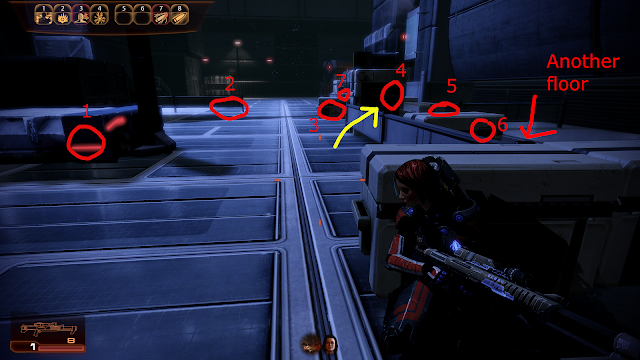 Also, we can see clearly that there is a floor on the very right side of the screen, so we know that we could walk along that side or that enemies can come up the right side and flank us.

But now look what happened to our view of the sky/ceiling: 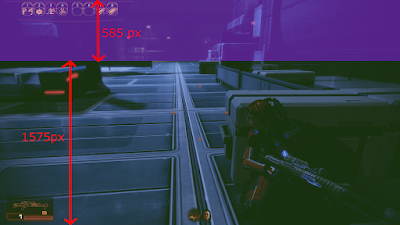 We have 1575 pixels for the ground and only 585 for the sky. That's about 73% ground. Also, compared to the "looking flat" image above, we don't see any skylights! If we spent the whole time playing like this, we might not even notice that the room has a skylight. Think of the poor skylight modeler who poured their heart and soul into that skylight, only to have it be completely off-screen.

For comparison, let's see what happens if we look up:
Wow, very skylight. Much scenery. We get a sense that this is a room in a building with some stuff going on outside, so why not play like this all the time? 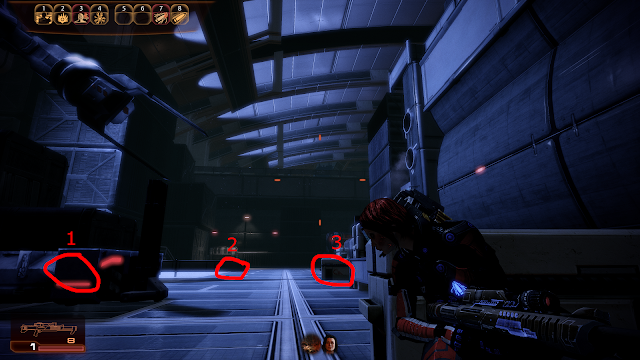 Because we can't see the gameplay-critical information. That 4th cover point is completely obscured, and we can't even determine that the railing is a railing and not a wall. We also can't see the floor on the right, so we miss another path to move down or worry about defending.

Now, what happens when we add enemies? 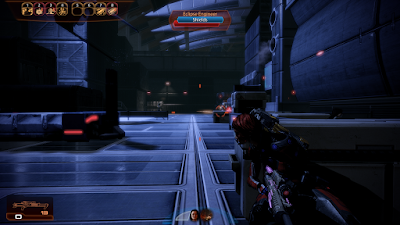 We need to give as much screen space to them as possible, and there's even a risk that there could be something right on the other side of our cover that a flat or upward-looking view would obscure. Also, the vast majority of enemies in the game are ground-based, so knowing where they are in relation to their cover and ours is critical.

Here's a video of me playing this section.

The mouse wobble at 0:30 was due to a weird thing where zooming in with the sniper rifle sometimes causes the mouse acceleration to go wonky. It isn't just because I'm bad at the game. I beat Dark Souls, so I'm a real gamer.

The fundamental problem is that the split isn't really "ground (green) vs sky (purple)" as suggested above, it's "gameplay (green) vs pretty (purple)". For the record, I absolutely planned out that color alliteration. 100%. I wouldn't lie to you. 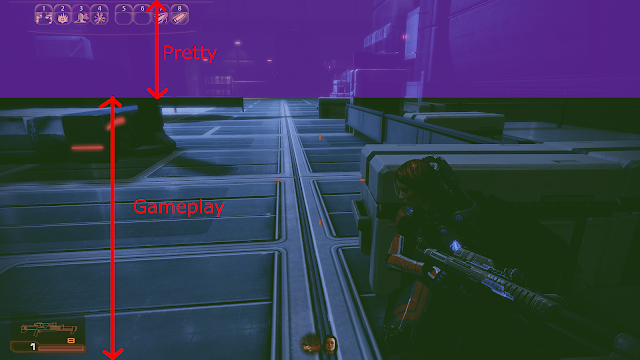 In a fast-paced action game like Mass Effect 2, you're naturally going to do things that tip the balance in your favor, even subconscious things like the default viewing angle. You need an angle looking slightly downwards to get a perspective on the battlefield and see where the cover spots and floors are so you can plan your traversal through the terrain.

Additionally, the game designers are limited in how much "pretty stuff" they can put in the "gameplay" part of the screen, since if that area becomes to visually cluttered, you would have a hard time recognizing which things are cover and which are just pretty doodads. It must be a very difficult balance to make something visually interesting, but still immediately recognizable as "valid cover" when the bullets are flying and you need to relocate quickly.

How would you fix this? I'm no game designer, but I have some ideas. 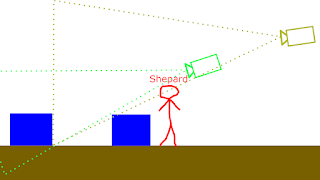 As I thought about it more, this seems like an unavoidable problem with cover-based 3rd person shooters, at least to some extent. If you give up on the cover-based-ness, then looking at the ground in front of you isn't as important, and you can spend more camera real estate on other things.

Well, I didn't really solve any problems, but at least I figured out why I spend so much time looking at the ground and not the pretty assets. As a reward for reading this far, here's a screenshot of the Objectively Correct romance option in ME2. 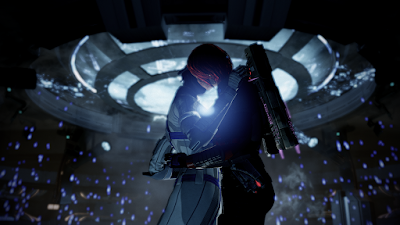