Welcome back to my ongoing adventures in making
Ubuntu work once again. Today's episode features printing!

So upon trying to print a document, I found that my printer hadn't been set up.
No problem! I guess I had forgotten to do so. So I jetted on over to the "System
Settings" application, which helpfully had a "Printers" button. "Why hello Mr.
Printers button," I said. "Let's go on a magical printer-configuring adventure,
just the two of us!" Clicking on Mr. Printers, I was greeted with the Nice™,
Shiny™, Sexy™ Interface below: 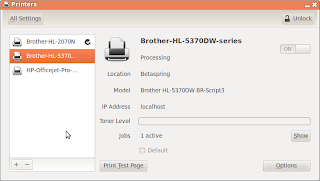 Since my objective was to add a new printer to Mr. Printers' Magic List™, I
thought I'd click the "+" button.

"Not so fast!" Mr. Printers said gleefully. "That button is grayed out, so
clicking on it does nothing!" I should confess that he didn't actually say this,
since clicking the grayed-out button did exactly nothing, but I like to think
that this is what he meant, in his silence.

Despondent, I searched for a clue. My eye caught sight of the "Unlock" button in
the upper-right corner of Mr. Printers' window: 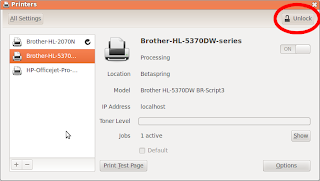 "Aha!" I exclaimed with joy, "I bet this will unlock the secrets of the
printer!" I clicked on the button, entered my password to confirm that yes, I
did want to modify system settings, and lo and behold, the "+" button was no
longer grayed out! Being the masterful designers they are, the team responsible
for the "+" button saw fit to make the difference between "stubborn, indignant
Mr. Printers" and "helpful, charitable Mr. Printers" as clear as day. Just take
a look! 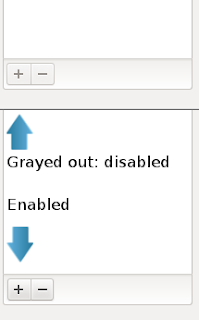 What could be clearer?!

After that, I clicked on the now-enabled "+" button which whisked me away to
this lovely dialog: 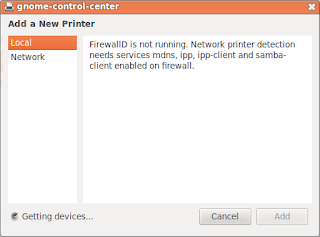 Now, I should clarify, in older versions of Ubuntu, the "Add Printer" dialog
would automatically detect any printers on the network, allow you to connect
with them, and figure out which driver to use, all without needing to wade
through lists of devices. Now, with Mark Shuttleworth's Amazing
Intuit-Interface™, that pesky problem of things working has finally been solved!

So after a bit of Googling, I found out that you could use the old, Actually
Working™ printer-adding interface by opening a terminal (yes, yes, I know) and
running the program system-config-printer. That opens this old
friend: 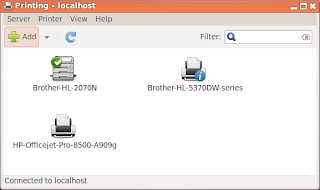 So thank you, Mark Shuttleworth, for once again taking something that worked and
turning it into something that doesn't work. This clearly is progress.


TL;DR If you want to add a printer, skip the "Printers" option
in System Settings and run system-config-printer instead.
Posted by Dan Hackney at 5:55 PM